Further to 'A Nostalgic Whim' 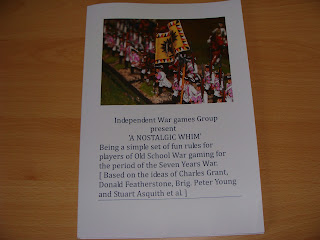 If anyone would like a copy of these rules please e mail me a robbie3rodiss@msn.com, I thought charging £4.00 plus p/p seemed reasonable. I do have pay pal but Im not to certain how I send an invoice,hopefully it shouldnt be too difficult [ said Mr Luddite]
Posted by Independentwargamesgroup at Wednesday, December 29, 2010 2 comments: 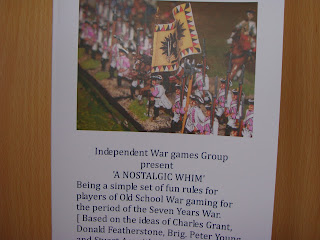 Well its good to be back,and with some news which I hope will lead to other things.
I have managed to get our Seven Years War rules printed in a booklet format,and very nice they look to.
My hope is that if I manage to sell sufficent of these sets,that I will be able to get them printed in colour. It seems that every current rule set,baring DBA is filled with eye candy, and it would be nice to showcase some 30mm SYW figures in full colour,anyway thats the hope at the moment only.
The rules themselves are pretty good [ no bias there then]. I think John [Reidy] did one heck of a job putting together  my wishes,which were to capture the period and more importantly to capture the ethos of Charles Grant and Brigadier Peter Young. The rules do seem to play pretty well,and give an exciting game. Anyway I will be selling the rules around the various shows that I attend this next year, so hopefully people will find them enjoyable.
Posted by Independentwargamesgroup at Tuesday, December 28, 2010 2 comments:

Yesterday I was very kindly given a dvd of several of the Battleground games that featured on Tyne Tees televison in 1978!!
The battles I have managed to obtain are, Chalons, Edgehill, Waterloo and Gettysburg. The other battles were I think Trafalger and El Alamein, though I may be wrong on this. The whole viewing experience was a massive dollop of nostalga, especially seeing the likes of John Braithwaite of Greenwood and Ball fame and a very young Ian Dickie of Minaiture Wargames fame.
One thing that struck me straight away is how difficult it is to make an actual wargame interesting to a person watching it on television. Peter Gilder who features in two of the battles obviously went for ' a bit of banter ' routine in an attempt to bring levity to the programme.
Duncan Macfarlane [god how young looking] adopted a more serious manner. Really neither suceeded in making the wargame a piece of television.
However I remember when I saw them the first time around being enthralled,especially the beautiful terrain and wonderful figures. Even now they would stand the test of time. The rules were in main  Gilders creation, and were complicated as was the trend then, in an effort to show everyone that we weren't playing with toys but actually re enacting history.[ Ah the conceit of youth]
The programmes did bring it home to me how difficult it is to make a wargame interesting to a newcomer or passerby. I think the key still is, eye catching terrain and figures, a 'facilitator' to present the game and explain everything, whilst making it interesting [difficult  for most gamers] and a lot of friendliness from the gamers actually fighting the battle,to make the whole thing welcoming.
Ideally a re incarnation of Peter Gilder would do! They man was always an idol of mine and whatever faults he may have had, he certainly knew how to present a game.
So getting away from the critical points, I still think the television series was a must view for all wargamers, well done the now defunct Tyne Tees television.
Posted by Independentwargamesgroup at Saturday, December 11, 2010 6 comments: