Vintage reading to go with my regressive wargaming ideals.

When I opted to revisit my early war gaming period, I somehow started to also revisit the books that had enthralled me when I was just starting on the war gamer's path.
In the 1970's and early 1980's one had to really scratch around for fictional [ and non fictional ] books to feed the war gaming bug.
Again, unlike today, there wasn't that many fictional books based around military history. Now there seems to be a new author turning out some latest trilogy about some Sharpe like character, not that I am complaining as I seem to buy quite a few.
Anyway, in between building my Seven Years war armies, trying to complete my Wargamer's Newsletter collection I have been tracking and buying books that I read when I was a teenager.
I hope some of the titles that I mention will be of interest to any wargamer's out there.
Firstly an old favourite of many dyed in the wool war gamers, is Alfred Duggan.

Duggan was an interesting character and a very good historian. I was lucky enough to have a mother who collected his fictional books, and I have gradually been replacing the paperbacks with hardback copies. If you are interested in the Norman period I dont think there is anyone better, certainly around the period of the first crusade.
Saying that, my favourites are,
FAMILY FAVOURITES, the story of the Emperor Elagabalus.
FOUNDING FATHERS, the story of Romulus and Remus.
ELEPHANTS AND CASTLES, the history of Demetrius, son of Antigonus One Eye.
LITTLE EMPERORS, the story of Britain after the Romans left.
HE DIED OLD, the story of Mithradates, King of Pontus.
Duggan wrote in a lovely old fashioned style with a great sense of humour.
You can still buy most of these books very cheaply in paperback.

Next was Cecelia Holland, who has written about some interesting personalities in history, including Atilla, William the Conqueror, Ireland in the 11th century and my favourite Genghis Khan.
This book is titled  UNTIL THE SUN FALLS, and is a cracking read about the mongols.
These books tend to be a bit more expensive, but are worth a punt, especially the last one.

One of my earliest memories of reading a fictional history book, was WARRIOR IN BRONZE by George Shipway, this is the story of Agamemnon and is still agreat read. He also wrote a great book called Knight in Anarchy which I would recommend.

Another of my favourite authors [authoresses?] is Patricia Finney who wrote two books about Cuchulain, A SHADOW OF GULLS and THE CROW GODDESS, both are brilliant books about the struggles in early Ireland, and are quite remarkable as Finney was only 18 when she wrote the first one.  These are available but could prove expensive in hardback, still they are well recommended.

To coincide with my return to the renaissance period, I located and bought the three books in the Leonardo da Vinci series written by Martin Woodhouse, the first, and best is THE MEDICI GUNS.
Woodhouse captured the period really well, and I enjoyed reading them again.

I think most older wargamers will have read EAGLE IN THE SNOW by Wallace Breen, which is a cracking read about the late roman army of the Rhine. This has now been reprinted.

I have just located and purchased two books I read in the late 1970's by an author called Charles Underhill, which was the pseudonym of Reginald Hill.
The two books, THE FORGING OF FANTOM and CAPTAIN FANTOM concern a Croatian mercenary officer in the English civil war. The books are based on a Croatian mentioned by John Aubry, who was allegedly a ' hardman' that is a man who was very hard to kill. Fantom is a blackguard and a rapist, and I must admit I do like him, which doesn't say much for my ethics.

Another series I have located and re read are the series by Nigel Tranter about Robert the Bruce, granted they are a bit romanticised but give a good grounding in the period.

One that I occasionally see mentioned by other war gamers is SEVEN MEN OF GASCONY by R.F. Delderfield, who was a real pro french author. I still enjoy re reading this book, especially concerning the 1809 campaign.

A real blast from the past is a GOAT SONG by Frank Yerby, about the Peloponnesian wars. It is a little bit dated in its style but the siege of Syracuse is well presented.

I must mention an old favourite and that is the Flashman series, which was and still is one of the best historical fictional characters ever created. George MacDonald Fraser knew his history, and again I could empathise with Flashman. What I still love is the lack of political correctness, and the idea of an Englishman having a god given right to bestride the world, [ I wish.]

I can remember reading two books about a dragoon in the Malburian wars in the mid 1970's but can I hell remember the author of titles, I do remember they were a damned good read.Such is life.

This list is by no means exhaustive, but is a taster of what I have been reading and collecting. I haven't completely regressed, and still avidly collect Bernard Cornwall and Conn Iggulden books.
However, these books hold a particular nostalgia for me, all are well written in my opinion, and seem well researched.
Enjoy..................

Summer, the time for campaigning?

Its been a while, although I've managed to put one post on my sister blog.
Why is it that in historical terms Summer was the time for campaigning, but in wargaming terms, Summer is a quiet time.
There are very few wargaming shows in July and August, and clearly judging by the blogs, a lot of wargamers have family commitments.
I was no exception in June, but most of my absence was purely selfish, with the return of the Springsteen world tour.
I still managed a bit of wargaming, and also a bit of painting.
I have been concentrating on my renaissance army, but I am still chipping away at my SYW project, which is really a long labour of love. 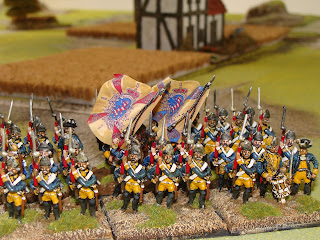 I was fortunate enough to pick up three units of Hinchliffe painted units, and only had to add to them to make them into  36 figure units. This is the first that I have completed. The figures were beautifully painted and I feel very privileged to have been able to own them 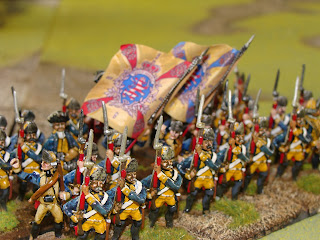 You can see my handiwork in the back ranks, which I have tried to paint in a similar style.

Rick Priestly in the latest WSS, wrote on an interesting point. Are we collectors or are we wargamers. I know I am both. In fact I know I've got a problem as I always feel the need to complete a collection, whether it is a magazine, series of books or an army.
Hence I am still painting SYW units. I know I can never have all the units that fought, but I cant help painting units that have taken my fancy, ie The Royal Italians in the French Army to the Saxon Garde grenadiers.
There is probably a name for it. I call it a beautiful obsession. It sounds better than a sad git with more money than sense. Still onwards and upwards. Anyway talking of obsessions, I'm off to Ireland to see Bruce again, sad yes, excited, you bet.