On Thursday night John and I were invited to game two of Colin's War of Independence figure extravaganza.
I have always liked this period, and after watching Al Pacino in Revolution, I always wanted to fight the period. I think its the dodgy wigs or something.
The scenario Colin had set up was a good one, and losing the dice roll and being given the British, I had some tactical problems to overcome.
My aim was to get a supply train off the table intact,before the scummy rebels stopped it.
All in all the Brits had a few problems. This is coveredd in Colins blog, 'Carry on up the Dale'. So I wont steal his thunder. What did come out of the game was the rules, this time 'British Grenadier'.
Now I didnt mind them too much,although the disruption points became a bit of a chore.
But we all thought that they just didnt capture the feel of the period. Which is a bit daft,considering we have no real idea what the 1770's was like.
However the point of this is, are there any really good rules out there for this specific period?
Barry Hilton producded The Lily Banners for a specific period, Folorn Hope were also producded for a specific period, both work really well, and capture the feel of those times [ I think]
So where are the set for this specific war.  The  American revolution threw up some quite unique tactical problems for both sides, and I think there is a definate need for some rules that reflect the problems encountered.
On another thread, I was sent some lovely figures from Fighting Fifteens, namely Eurekas, String Quartet, Frederick the Great Playing his flute, and Frederick and Voltaire [ probably talking divel] in the Gardens at San Soucci.
These are excellent figures, although not cheap. Well recommended for the Syw collector.

Fresh back from the York show,I feel inspired and keen to press on with the resolutions that I have made.
I always manage to get to the show by a different route,but it was worth it. There was a definite buzz about the place,with some nice games,and loads of wargames products.Although my intention was to curb my spending I still managed to empty my wallet. The best buy being some more Minatur [TM] flocks, this time some summer flowers and new grass clumps, and best of all 25 copies of the old SYW journal including the first years releases.
I particulary liked the do it yourself bring and buy,which was a good way to barter with the actual owner of the figures, much better than the normal scrum. All I need now is to be allowed to stage a game at the show, at the last count I was eleventh reserve. The best game for me was the Tobruk game in 15mm, excellent painted Italian tanks. 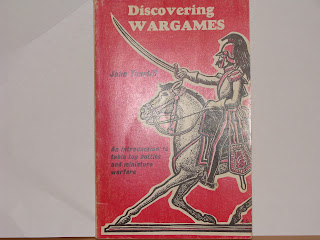 On another topic, I have been gradually completing my OSW library,book by book. The idea was to obtain every book that has been released when I started wargaming in the year dot. It really was a daft idea,as some of the books when revisited aren't as good as I remembered, a bit like Dandelion and Burdoch [ a British thing]
Still some hold their magic. The latest purchase was John Tunstill's Discovering Wargames, which was part of a series which also included, Rules for Wargaming by Arthur Taylor.

I have quite a few of John Tunstills magazine Miniature Warfare, which wasnt a bad wargames magazine in the early seventies. The actiual book is naturally dated,but still has its place in my growing library. As regards my wargames room [ sorry house ] building project, my builders hope to kick off in March. Its still difficult to get excited after all the troubles I have experienced over the last few years with the planners etc, but I can say I am excited about my room. If things go to plan my table will be larger than expected, with lots of shelf space. I still cant decide wether to scrap all my terrain boards,and build new ones, especially after talking to Alan from Games of War who reckons he now has a machine that can cut contours in insulation board, thus allowing me to create proper rolling terrain.
I had to include this photograph from the Discovering Wargames book, just to show how gamers looked
in 1969. They certainly looked to me,more intelligent,and smarter in their dress.You cant beat a bit of cord. 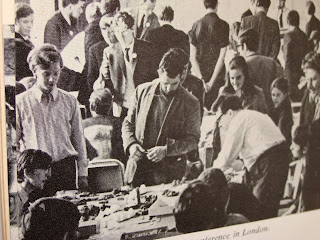