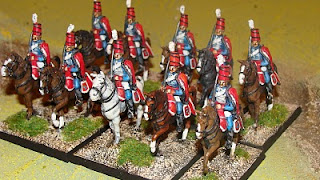 Moving on from the best rules list,I thought Id better balance this with a small list of rules that I found pretty poor.I would stress this is a personal opinion and I am not paid to promote one set over another [ I wish].
One set that always struck in my mind was Bruce Quarries Napoleonic rules,which I must admit I fought with for at least a year before I gave up on them. They were released originally in 1974 and then expanded on from there into quite a tome.The rules attempted to show that wargamers should be taken seriously and that we didnt just play with toys.Hence Bruce introduced the thorny subject of national characteristics,which caused endless arguments and on one occassion I can recall, nearly coming to blows over the abilities of British riflemen. Looking back it all seems very embarrasing but at the time it was important.The rules catered for every eventuality and while I still keep a copy,just to reminisce over I think they were pretty naff rules. A more modern set was the recent release, Minden Rose which I used only last year, I really disliked these rules, if only for the fact that they heavily penalised everyone but the prussians [syw]. I also disliked Kreigskunst again purely for the fact that they favoured the prussians, the only question I have got about the Prussians is,if Frederick was so great why did it take seven years to fight a war to a stalemate!!
The IWG was born out of a reaction to the then domination [in the 80's] of the Wargames Research Group who tended to dominate all wargames rules at one time. There is a pattern forming here I know,but I remember feeling lucky to escape injury when having been invited to a refight of Wagram using WRG napoleonic rules where a serious argument broke out about the use of Austrian 'masses' [ I would like to say it had nothing to do with me] the rules to be fair were well put together but were definately for the competition minded gamer, which I am definately not. John and I used for several years their renaissance rules by George Gush.
I have always liked Gush and his style of writing but the endless use of tables created long periods of inertia. My final naff rules have to include Peter Gilder's, In the Grand Manner.I have used these in three battles and each time have come away promising never to use them again. I hasten to add I only use them when I go to the Wargamers holiday centre in Scarborough,which I love,that is until I play with the rules. I think it is obvious that I like simple rules,with the emphasis on playability. Anyway just something to mull over...............
Posted by Independentwargamesgroup at Sunday, February 14, 2010