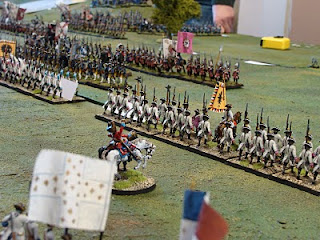 Having survived the first Prussian brigades fire,the Austrian around Mollwitz,backed up by the only artillery battery in the army poured fire into a batallion of Prusian garde causing it to rout.
At the same time a second unit of prussian infantry was forced to retire to the battles edge.Things were not going to plan. Using a special rule to re create Frederick's well known cowardice at the actual battle,[Colin] was forced to dice for him.Frederick survived the throw,but it did not bode well for the future.
Properly stung by the Prussian setback,the Prussian commanders attempted to re assert their superiority.The black hussars charged again at another unit of Austrian hussars,whilst on the right flank the Prussian second and third brigades attempted to move forward and drive off the Austrian cavalry. This was not to be, as one batallion of prussians received a 'blunder' result and a second regiment refused to move.
Still out of position and unable to support the first brigades attack,the Austrian cavalry charged again,and surviving the fire were able to rout a second unit,whilst in the battle for Mollwitz,a further Prussian batallion was heavily shot up and forced to rout. The coup de grace was delivered when the Black hussars routed from the field of battle,quickly followed by Frederick.
By the end of the move,four Prussian units were retiring from the field, attempting to catch up to the four routing Prussian units,who in turn were attempting to catch up to their king.
It was only left to the victors to re write history.........................
Posted by Independentwargamesgroup at Monday, February 01, 2010