The title of this entry is a curious one, but is the title of a book that I have just finished reading called, 'He Died Old' by Alfred Duggan. As I have stated before I am a bit of an anorak when it comes to collecting things,whether wargames figures,books or magazines. the same goes for authors. I have always enjoyed the books of Alfred Duggan,after being recommended to read ' Foundling Fathers' by my late mother [god rest her soul] when I was a pallid teenager. Duggan was an excellent author of historical fiction who had an idiosyncratic way of writing. Over the years I have slowly put together his collection of books and He Died Old is one of the last that I needed.[ Well technically I didnt need it, but I wanted it] He Died Old isnt a fictional book,but an enjoyable life of Mithridates VI `the Great' of Pontus.
Now I knew very little about this figure,but having read this book, I want to know more. He was known as the poisoner king,who in order to survive took poison every day to build up his immunity. He fought three wars against Rome,and apart from marrying his sister and then having her executed,also sired numerous off spring,one of whom finally betrayed him.  He also inspired immense loyalty in the Hellenic world. Oh and by the way,instigated a massive pogrom which saw 70,000 italians/roman civilians killed. Duggan manages however to provide an enjoyable read to a massive character of ancient history and I do recommend this book as a good start to learning about Mithridates VI.
I would also recommend 'Foundling Fathers' the story of Romulus and Remus, 'Family Favourites' the story of the Emperor Eglablagus?, 'Knight with Armour' a story of the first Crusade, ' Threes Company' the story of Lepidus and all right then, any other book written by Alfred Duggan. 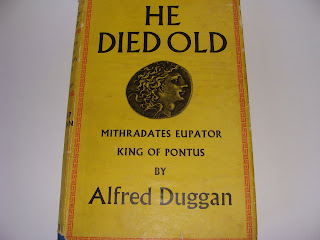 Some have been re released and are available on Amazon, buy one give them a try. I have been viewing the photographs of the painting competition from SALUTE 2011. The standard is as usual very high,but I have noticed that what is classed as a wargames unit is becoming smaller, with some being five figures or less,but set in really nice terrain. We used to call these dioramas. It is my intention to go back to Salute next year after a lay off of several years, I think I will enter the painting competition, I can proudly say the last time I entered I came second in the wargame unit section. That occassion it was with a unit of 20 Aztec Eagle knights.I dont think I am up to the present standard however.
Posted by Independentwargamesgroup at Thursday, April 28, 2011