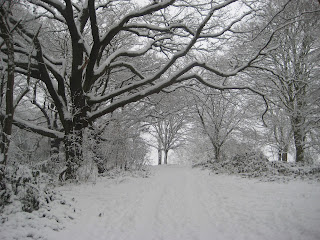 I haven't been able to post for several days,if not weeks,due to Blogger telling me that my system  was no longer working or supported by them.Not being a child of the 21st century this meant I hadn't a clue what to do,anyway more by good luck than good management I am back.
I was wanting to post my views about the York show,as soon as I returned from it,but hey ho.
The travel south luckily was not like the photograph my sister sent of Hampstead Heath, but numbers were down. Additionally I set off later to make certain the roads had been gritted.
I blame the media for the panic that is created every time there is a threat of cold weather, its winter,live with it.
Anyway,numbers were down,but it was still a good show,with only a couple of traders failing to make it. Games wise,there were definitely less games. I finally met Mark Dudley who had a lovely old school game on display.
Whilst there I bumped into Charlie Wesencraft who also admired the game, and as we were talking Charles Grant Junior appeared, god if I'd only had his books with me. He seemed a very nice guy.
The bring and buy was replaced last year,and I think its far better. You can haggle on the prices,and I think its far more efficient. Other shows,in particular Triples take note. The punter is there to sell their  stuff,and none is creamed off before the items are put on the table. It worked well for me.
I managed to curb my spending to a few! Jackdaw command groups,and some paint.
Still a good show.

Posted by Independentwargamesgroup at Sunday, February 12, 2012