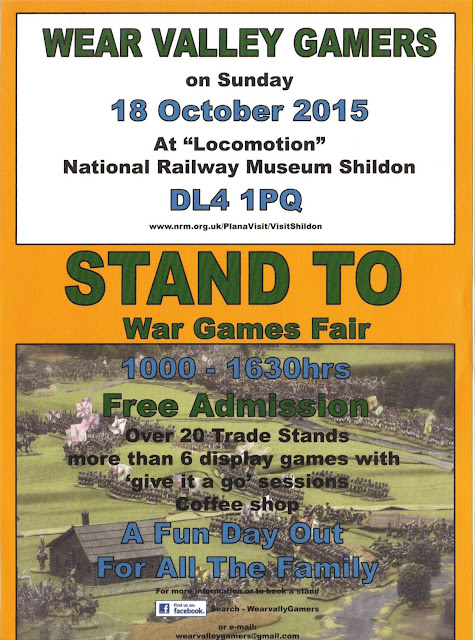 Well I attended the Gateshead show yesterday, which I was really looking forward to. I don't know if its me, but I've felt there wasn't as many shows around as usual. Its probably me.John and I shared a bring and buy table early in the show, just to get rid of some stuff. I think it is the best way to sell wargaming ephemera, certainly its a very effective way to have a bring and buy without the organisers having to find some staff to run it.
Anyway, we got rid of quite a bit of stuff, although for some reason 15mm painted figures, at knock down prices weren't selling?
I always get a buzz attending wargames shows, I know I should be used to them after all these years, but somehow I still cant wait to stroll around a show.
On the AMG forum, there is currently a discussion about the announcement that Front Rank will no longer attend any shows, and whether this is a good or bad thing, some posters agree, some dont. Personally I think its a mistake by the company, but what do I know, but what better way than to keep your company in the public's eye, and please dont give me the guff about the internet.
Physically seeing the products, talking to the dealer, and then comparing opinions with other wargamers must promote the range you are trying to sell. I always think of Hinchliffe, and Essex who dont seem to attend any shows now, some wargamers aren't aware that Hinchliffe still produce their ranges, and pay inflated prices for secondhand metal due to this.As for Essex, 20 years ago, their 25mm ranges were the figures to buy, now one rarely sees them on a table.The figure ranges are still out there. Wargaming is about inter action between like minded people, and that includes solo wargamers. What can be better than to chat about some figure, rulebook or paint technique to another wargamer. Who wants to be a miserable sod.
Leading on from that, I do know that there are a lot of wargamers that never attend shows and rarely buy magazines. The great Donald Featherstone would always bemoan the wargamer that didnt buy his magazine, and I always thought he had a point. Wargames magazines, love them or hate them, are a showcase for the hobby, again the internet has its place, but magazines still have an important role in the hobby. So if you can afford it, buy them, even if its to cut out the pretty pictures.
Anyway, back to the Border Reivers show.
I thought the show was pretty busy, most of the day, and certainly up to 1.00pm. The venue has plenty of parking, a decent canteen, and I understand is reasonable to hire. The only downside is the crap lighting, but that is a common complaint across the country.
I seemed to spend more time chatting to other wargamers, so much so that I didnt take any photographs! A first for me. Game wise, the stand outs for me, were the cheeky chappies from the Westerhope club, with a Zulu  game, and what appeared to be an Oldhammer game with some nice figures and terrain. Sorry again that I didn't take any images.
As regards the traders, of which there were many, Leven Miniatures www.levenminiatures.co.uk had some beautiful 6mm buildings at very reasonable prices. I had to buy some of their Napoleonic ranges for the Blucher games.
Due to gabbing on, I missed out on buying the new Ottoman turks from Warlord games, although I managed to buy one commander, and very nice they are to.I still managed to end up buying quite a bit of stuff, including more paint, and bases.
So Border Reivers as a show was for me a success, great crack, something to look at, and a nice buzz at the show. Support your local wargames show.
The poster at the top is for my next local show, where I promised I would put on a game.A nice venue, full of trains, free to enter, free car parking, and now wargamers. What more could you want?

Posted by Independentwargamesgroup at Sunday, September 06, 2015