Postscript to The End of the Dinosaurs. 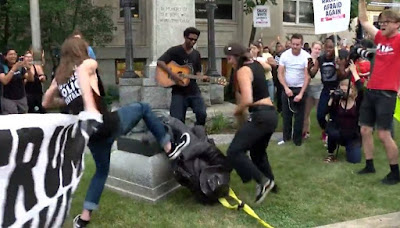 Well I'm back from a holiday in the land of the free where between theme parks and eating
unfeasibly large amounts of food I watched the furor breaking out in Virginia. As I touched upon in my last post regarding the future of wargaming, a countries history no matter how unpalatable is in the process of being socially engineered by various special interest groups in order to suit their purposes.
I don't seek to condone the death of the girl protester and the needless deaths of the two state troopers but watching the images of protesters tearing down the memorial to the Confederate fallen it frankly sickened me, simply because these so called liberals are acting as badly as the dangerous clowns in the KKK. Both are contemptible in their behaviour and frankly deserve to be placed in a room together to sort out their stupidity without affecting the lives of the majority of ordinary people who just want to get on with life.
Trump has been pilloried for comparing the two sides, and it was interpreted as a clumsy attempt to justify the behaviour of the KKK. I dont think Trump is clever enough to attempt that and in fact naively tried to articulate what a lot of onlookers were thinking, namely that one side was as bad as the other.
So where does it end? Clearly the 'liberals' will prevail becaue they usually shout the loudest and the Liberal Elite have more power, so the Confederate memorials will disappear one by one. Perhaps that is for the best, but why stop there. Because after such rage, a new target will be looked for. I fully expect to see college students holding a book burning ceremony of all books charting the history of the conflict and God help any author who has written a balanced book about the rebellion.
The revisionists will have a field day as they re write the conflict to suit their political narratives.

So what has this to do with wargaming? Well as I have stated before we are an easy target for such protests. Lets be right the title War and Gaming stick in the craw of inadequates looking for offence and given the effect of Social medja [sic] I fully expect some shit to come our way eventually.
Ultra modern gaming is a case in point, fighting a game involving the Taliban or even Isis is just too good a target for some of the worthies on the Internet, and don't mention the Indian Mutiny, or the first war of Indian Liberation as I have seen it called recently?
Given how this country follows the USA in everything, I can see our precious Snowflakes lassoing the statue of Churchill, or Queen Victoria and attempt to pull them down. I mean one was a Warmonger and the other was the Oppressor of the Indian sub continent.
There is no defence to ignorance, so baton down the hatches and carry a very big stick, just in case.
Oh and I had a wonderful time in the USA, by the way. 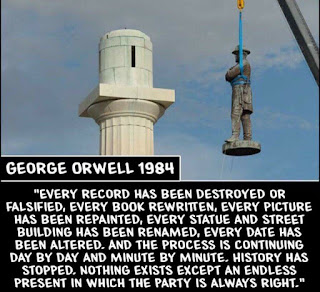 Posted by Independentwargamesgroup at Thursday, August 17, 2017