New Rules Aren't All That Bad. 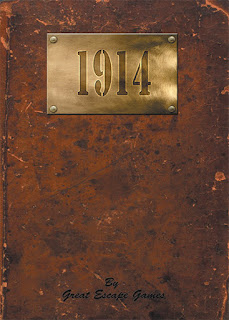 Over the last few years there has been an ever increasing number of wargaming rulebooks hitting the market which I have been critical about, simply because of the large number of releases and their repetitive nature, using similar mechanisms etc.
Last week however I turned up at John's to witness a First World War landscape with early war German and British troops facing each other. I knew he had been painting up some 12mm? figures and had been very keen to use a set of rules he had bought from Great Escape Games.
This would be the second wargame I had ever fought based around the first World War and I looked at the scenario with some trepidation.
Selecting the German's simply because there was more of them I set to battle. For the next four hours battle raged across Belgium where I began to fully appreciate the firing abilities of that Contemptible Little Army.
It was a very close battle but at the end the British had captured two of the three objectives and the Kaiser's army was basically exhausted. What a cracking game. The rules were easy to understand but not simplistic. The whole battle was fast moving and very enjoyable. New rules aren't all that bad.

Posted by Independentwargamesgroup at Wednesday, July 11, 2018