Where have all the armies gone?

As the nights begin to draw in I get more time to think about wargaming matters that have been picking away at my consciousness for a while. The current thought that is disturbing my sleep is this; where have all the armies gone?
By this I mean all the units and armies that have been painted over these last forty or so years that get sold on for various reasons. What has happened to them.
As some wargamers will be aware I am currently [well will be when I've done these damned French ] painting English Civil War armies using Hinchliffe figures. My goal is to replicate the wonderful armies that my long suffering wargame enemy John Reidy had in the early 1980's which he inevitably sold. These armies were used at one of our very first exhibition games when we put on the Battle of Edgehill at Durham University.
Obviously one gets nostalgic tinted glasses when one thinks of old armies, but John created two wonderful armies back then and they were an inspiration [to me especially] Sadly I couldnt afford to buy them when he sold them on. John has always been an annoyingly good painter and worse a very quick one., but because his first love was ECW these armies were particularly lovely.
Another annoying trait he possesses are his wargames diaries which he has kept since the year dot.
As a result I asked him to consult the 'volumes' and find out exactly who he sold his ECW armies to and when. Amazingly he has been unable to furnish me with the information, although he was able to provide details of what he bought at the Northern Militaire in 1982, which seemed very important back then but of no earthly use to a sane man.
This lack of information started my sleepless nights.
So just what does happen to the armies you sell?
They never seem to surface again.
Are never seen at shows or at club nights.
They never seem to resurface on E Bay and the like.
Basically they just seem to disappear into the ether.
Given the vast increase in wargaming blog sites etc one would think I would at least see an odd image.
Frustratingly I was able to track down and buy TWO! of the old ECW wagons that John had painted for the armies, but it was hardly a consolation more a reminder of just how nice the armies were.

I now have an image of some nasty wargamer sat in a very large house packed with thousands of wonderfully painted figures, drooling over them and whispering 'my precious,' intent on no other person ever seeing or using them ever again. [Shaun Lowery are you reading this.]

I can think of many other examples of wonderful armies that simply disappeared, our Napoleonic 25mm armies are a case in point, sold and never seen again period.
I did manage to locate and buy John's old Turkish renaissance army but have never been able to locate our late Polish renaissance armies which contained lots of the old Campaign Miniatures figures. They have simply gone.

Frustratingly, following a conversation yesterday I believe these ECW armies may have been sold to an individual called Andy Hardy? who was a member of the old Durham Wargames Group back in the early 1980's who subsequently disappeared.
A common thread is developing here I think.
So is this the pseudonym of the arch villain who sits in a darkened room refusing to allow his purchases to ever see the light of day again?

A case in point. Which lucky so and so bought this unit by the late great Peter Gilder and why haven't they been seen again? AND more importantly why dont I own them? 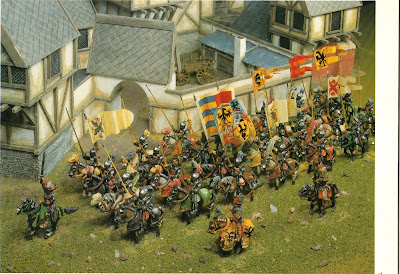 Posted by Independentwargamesgroup at Wednesday, October 10, 2018