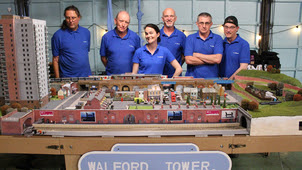 Watching anything hobby related on the television usually ends up as a toe curling spectacle with the presenters taking great pleasure in highlighting the eccentricity of the hobbyists and generally letting them talk themselves into confirming just how weird some people are who like unusual hobbies.Like nutters on the last bus home.
When I saw that there was to be a series called The Great Model Railway Challenge I suspected it would follow the pattern used for re-enacters, computer gamers and sadly wargamers.
The first episode tended to confirm my cynical suspicions as the producers wheeled out a group of serious geeks resplendent in the obligatory black and far away stares.
But I stuck at the series and as each leg of the challenge took place and I have become more impressed in the way the whole series has been conducted.
Yes there was the obligatory, 'lets take the piss out of these geeks' by introducing a superfluous craft something useful from this rubbish I've found leg.
To the credit of the railway modelers they took it in their stride with some clubs actually refusing to take part in the attempt to dumb down their hobby. It didnt help them, they still got knocked out.
Each week three teams of railway modelers are challenged to create a fully working display in three days using a theme set by the programmers.
I have been impressed by the ingenuity and abilities of the club members although I was distracted by other items on show when a 'Steam Punk??? modelling club brought along two women dressed in basques. The ploy didnt work and they didnt get through, mind there display was unfinished. Must have been the feathers they wore.
What really impressed me was the actual layouts they produced and the speed they were able to make great looking realistic terrain.Sadly as usual the actual figures were up to their usual standard of naff figures badly painted.
One team displayed the French Imperial Garde Grenadiers tramping over some beautiful fields [ don't ask] that looked like they had been painted by a drunken chimpanzee. How does that happen? These modelers make wonderful working models with great looking backdrops and models and then stick crap figures all over the place. A bit like the old Subutteo fan figures.
So how is this wargame related? Well these clubs were in the main very good and I now want a railway layout. It wont happen, but the clubs got me interested in their hobby which was a good thing. Give it a go, the terrain was inspiring.
Could there ever be a wargame programme using a similar challenge? I doubt it. But wargames clubs refighting battles from history in some sort of knockout competition could be entertaining. Imagine a Blackpowder challenge fighting the main battles of the Napoleonic Wars?
Somehow I know that certain wargamers would shoot the hobby in the foot by insisting on turning up decked out bizarrely or storming off after a hissy fit. Still it would make good television. Now if I can only find some scantily dressed basque wearing women to be on my team.

Posted by Independentwargamesgroup at Sunday, November 11, 2018