As I have stated previously I have sold my home pending the completion of all legal matters,which has proved a problem in the past. I have had a couple of sleepless nights already realising the enormity of what my wife and I intend,ie. move home,find rented accomadation and then build a new home whilst pending retirement. No pressure there then.
One of my worries is how do I pack and move ALL my terrain boards,all 70+. These boards have been built over the last 15 years and are all 2'x2' mdf. They are bulky and they are heavy. It also came as a shock just how much stuff you gather over the years when war gaming and collecting in general,and that's without what I have stored in a friends home,which is my war game magazine collection. I think like most war gamers I suffer from a hoarding illness,and hate throwing away anything, just in case........Heavens knows what the 'in case' actually is.
In the past I have been quite ruthless about metal mountains,however I have been hoarding lots of RSM Hanoverian figures,just in case they stopped making them. I have also come across about 30 jars of paint,all in primary colours,just in case they stop making red,white and blue acrylic paint in the near future. Where does it end... Whilst contemplating the huge task of packing these things up, you start to think of the problems of next of kin,should I slip this mortal coil before I complete all my projects. Who would get rid of my stuff? Do they realise their true value? Who would actually care?
All answers on a postcard. Anyone got any cardboard boxes? 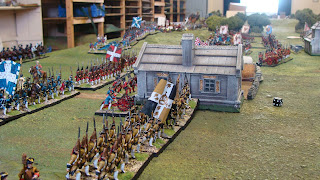 My wife has always said war gamers were a strange breed,and I think she was maybe right.
[ She actually used much stronger words!]
Posted by Independentwargamesgroup at Wednesday, October 06, 2010