I have finally finished  typing the ammendments to the SYW rules that we [3] use. I must say John did a good job of  taking my basic vision[thats a very pretentious word!] and creating a set of rules that I feel reflect the period while capturing hopefully the essence of Old School Wargaming. A tall order I suppose but they do work well,provided they are played in the manner required,ie. as a wargame, not a competition one. The problem that I now have is getting them printed as I added coloured photographs to spice up the dialogue,I also expanded the play sheets.So if anyone has got any suggestions as to how to get them printed cheaply then I would appreciate it a great deal. I tried Kreigskunst,Blackpowder and Minden Rose prior to John drafting these rules together,and although I am biased,these did work the best,but its all a matter of opinion as I do like the way Blackpowder work in other periods.
I have copied the title page and introduction just to give people a flavour of what they are about. 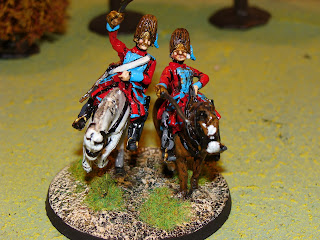 THE INDEPENDENT WARGAMES GROUP
'A NOSTALGIC WHIM'
Being a simple set of fun rules for players of Old School War gaming for the period of the Seven Years War.
[ Based on the ideas of Charles Grant, Donald Featherstone, Brig. Peter Young and Stuart Asquith et al. ]

These rules were born out of a nostalgic whim.......

The intention was to create a set of war games rules that would be fun to play, simple to understand and based on the principles of the founders of modern war gaming.

The rules are simple to learn, but should not be discounted as merely chaff. They require each player to use the tactics of the historical period, that is the Seven Years War, latterly described as the first world war.

This period was chosen as it was littered with historical personalities, colourful uniforms, blaggards and néer do wells.

My old war games opponent, John Reidy has crafted together ideas taken from all the giants of modern war gaming to create a set of rules that are intended for FUN, a word sometimes forgotten in war gaming nowadays.

I therefore ask all players to use these rules, suspend belief and enjoy the experience of large war gaming units and handfuls of dice.


Posted by Independentwargamesgroup at Wednesday, October 06, 2010