I am mainly watching; 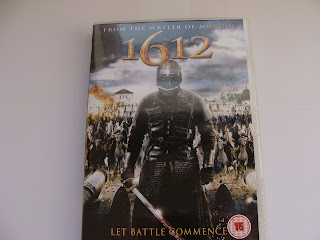 I am currently cat sitting,so between eating copious amounts of chocolate,and swilling tea, I thought I would take time out to watch my latest dvd purchase, 1612.
This film is a Russian film about the Time of Troubles, prior to the start of the Romanov dynasty.
It is in Russian,with sub titles, but strangely I thought it added to the film.
I got a tad confused about the hero's ability to go from downtrodden serf,to Spanish speaking warrior,
[ but remember Orlando Bloom in that crusader film] and I must admit I liked the film.
This film is a 15 rated, god knows how, the scenes of gore are pretty graphic,especially the scene where our hero discovers chain shot.
On the record, I love Polish winged lancers ever since Taras Bulba ,and this film has got them in respectable quantities. The costumes are pretty accurate, and the battle scenes are well done.
If you need a bit of Renaissance encouragement,this film is worth a punt at £6.00, thats about 4 Foundry figures,by my reckoning.
Posted by Independentwargamesgroup at Sunday, March 25, 2012