Afterthoughts About Salute 2013, and a bit of a rant.

I've probably done this show to death now, but I've been giving a lot of thought to my impressions of Salute and in particular the painting competition, and in particular the wargames unit part of the competition.
Firstly I was wrong in my original post about who actually won the best wargames unit. The trouble is the Warlords don't seem to post the winners straight away on their site
I now understand that it wasn't the Teutonic Knights last seen in the Fire Forge advert that won. 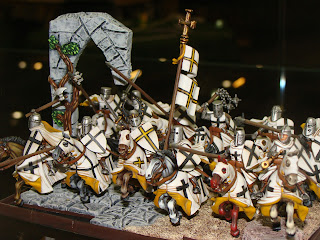 It was actually the Perry Wars of the Roses unit that won. The figures that one of the organisers told me would win, as they placed them in the display unit. Long before the judging was done.
Again I may be wrong, but I also understand that the WoR entry was from Darren Linnington, who I understand paints full time for Warlord Games. So I think that means two full time painters entering the competition. Both working for large wargames companies. 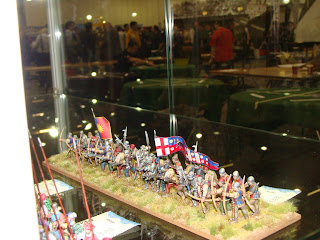 I think you can see where I am going with this post. Having checked, Darren, a very talented painter has now won Salute three years in a row, 2011, 2012, 2013. Nothing wrong with that one could say, but being the awkward sod I can be, I disagree. I was very disappointed when I saw the painting competition at Salute as to how few entries there were for the wargaming section. I now think its obvious as to why that is.
I have entered many painting competitions over the years. I have actually won a fair few as well, Northern  Militaire, Claymore, Stockton, etc, etc. Before a lot of shows stopped holding this event, I thought they were pretty well attended, with quite a number of entries.

I always got the impression that Salute was the premier painting competition, almost on a par with the White Dwarf competition, but not as good. Clearly this is not the case. Lets be right there is no way, any wargamer no matter how talented is going to cart their figures down to Salute, knowing that they will be up against a full time professional painter, who has won the show three years on the trot, and paints for one of the major wargaming companies. It would perhaps make more sense to have a separate section for people who could be termed 'professional', and then whoever wins that would have at least the kudos of beating their fellow professionals, leaving us mere mortals to slug it out on our standards. The whole idea of a painting competition originally was to encourage wargamers to give it their best shot, and be inspired to improve their painting techniques. Not now I fear.

So there we have it, a total professionalisation of the hobby. [If there is such a word]
Very professionally produced magazines, [ nothing wrong with that],
showing very professionally made terrain with professionally painted figures on them, which then turn up at the big shows,ie Salute, showcasing the very professional but expensive rule books. All in all a very professional hobby one would think if seeing it for the first time. Perhaps that is good, but somehow I get the nagging feeling that it sort of missed the point of the wargaming hobby, or am I just being a bit paranoid. Check out the latest Wargames Illustrated to see what I am burbling about. Anyway I will not pick over Salute again. Sorry for the rant, Robbie................

Posted by Independentwargamesgroup at Wednesday, April 24, 2013