Susan Boyle the next big thing in wargaming? 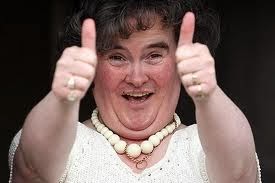 
I hope not to finish this year on a negative note, so I will endeavor to write another post before the New Year. However before I return to a more up beat tone,I am beginning to wonder about the latest book releases titled Mega Wargaming from Wargames Illustrated, price £30.00 and Masters in Miniatures from the Perry twins also retailing at £30.00.
When it was decided to publish these two books, who was the audience that they were actually aiming at?
I could understand when Henry Hyde released his book Wargaming Compendium, it actually had a purpose which I think it achieved.
I could also understand when John Ray published his book, A Military Gentleman. The book was clearly a labour of love. I was actually in the enviable position to be able to buy it, and the reason I did so was because I admire the artistry of John Ray and I personally know Dave Jarvis who painted a lot of the figures. I knew it would never help with improving  my historical knowledge but it would inspire me to hopefully paint a tad better. It was never meant to move the hobby on.
I suppose the same could be said of the other two books, but does it really?
Clearly Ron Ringrose is a talented chap, and has sufficient financial clout to be able to exhibit some lovely large diorama like terrain pieces in a very large wargames room, but it is hardly a typical set up,  and lets be right, the setups that he has created have been published with regularity by Wargames Illustrated ad nauseam.
Again with the Perry twins, they are clearly very talented figure sculptors, but filling 160 pages with photographs of their ranges is hardly going to inspire many new wargamers, especially when their ranges are invariably on show in the wargaming press every month.
So what is the justification for the release of these two books?
Personally, and its hard not to be cynical about these releases, it has to be money, what other justification can there be.
Will either of these two books be classed as wargaming classics in the future?
I very much doubt it. Once purchased and looked at, the books will be filed away and left.
Perhaps in some way similar to a record release by Susan Boyle, at the time a novelty, and then an embarrassment.
One of the things that bothers me is the price, again the magical figure of thirty quid!
I have just bought The Black Bands of Giovanni concerning the history of the famous black bandes in the Italian Wars. This softback book was £25.00, but it contains an awful lot of factual history, and is well researched. It is a book to return to should I want to check on some part of the make up of those units. That book is a well researched history book, Mega Wargaming and Masters in Minatures are really just pretty fluff.
My gripe, wargamers deserve better than this.
We all like pretty painted soldiers but please give the average wargamer some credit instead of looking to make some easy bucks.

Posted by Independentwargamesgroup at Saturday, December 28, 2013