A counter argument to some other postings. 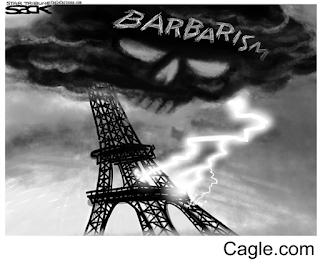 I've always felt that to spout my political views on a blog dedicated to wargaming is not the done thing.
Certainly when I was gainfully employed, even speaking about my beliefs could have very easily losing my job, and potentially ending up in court.
However I think that now is a good time to counter some of the out pourings that have filtered onto other wargaming blogs about the latest atrocity committed in the name of Islam.
In particular the blog of  Robert Cordery who posted a lengthy piece regarding the Paris murders.This and the inevitable Tricolour flags stuck on some blogs, seems to me slightly ridiculous. But then each person is allowed a view, and since the death of Princess Diana, it became fine to join in and show some grief.
Taking us back to the post of Robert Cordery, I follow his wargaming blog, and he seems a decent bloke, so my post is not a criticism of his view, and the majority of the comments he received.
Bob, to sum up his feelings uses a quote from Doctor Who?

‘So, let me ask you a question about this brave new world of yours. When you’ve killed all the bad guys, and it’s all perfect and just and fair, when you have finally got it exactly the way you want it, what are you going to do with the people like you? The troublemakers. How are you going to protect your glorious revolution from the next one? ... This is a scale model of war. Every war ever fought right there in front of you. Because it’s always the same. When you fire that first shot, no matter how right you feel, you have no idea who’s going to die. You don’t know whose children are going to scream and burn. How many hearts will be broken! How many lives shattered! How much blood will spill until everybody does what they’re always going to have to do from the very beginning – sit down and talk! … You're all the same, you screaming kids, you know that? ‘Look at me, I’m unforgivable.’ Well here’s the unforeseeable, I forgive you. After all you’ve done. I forgive you.’

Well I would like to ask Bob, and the other commentators this. Just what would it take, for you to take up arms  and physically fight for your existence? Another 7/7, another Tunisia, a new Charlie Hebdo, just what?

History has a tendency to repeat itself as mankind, forgets the lessons it has learned and goes on to make the same mistakes again. Prior to World War Two, there was a very strong pacifist movement, there was debates held about not taking up arms for your country, and a message of 'peace at any price'. Luckily Churchill existed,Hitler was clinically mad, and of course the rest was history.
But just suppose, that Hitler had not invaded Poland, and held off his war with France and England, but instead had invaded Russia, whilst pursuing his murderous intent to wipe out the Jewish population.Would Churchill have been isolated, and would the Peace Movement have been able to win a general election, thus keeping Britain out of a war against Germany. In turn blithely allowing us to ignore the genocide taking place across Russia and Europe. Basically that is how I see the views of Mr Cordery and his fellow commentators.
Sometimes ordinary people come face to face with out and out evil There is no way to reason with this evil, and all attempts at mediation are looked upon as weakness by the perpetrators.

What our country and France stands for are Western ideals. Live and let live, conciliation, forgiveness, love of music, laughter etc,etc, not perfect but at least people can breathe.
What these murderers stand for is ignorance, stupidity, cruelty,hatred of women, and every  ism one can think of.
Any person not of their persuasion is fair game for anything they wish to inflict upon them.
There is no middle ground, there is no starting point to show them, we deserve to be listened to.
To use the script from a Doctor Who episode is some how laughable, if it wasnt so damned sad.
Sadly due to the previous criminal acts of Tony Blair and his cohorts, our Parliament is hamstrung. A warlike response to the series of murders, and other murderous acts committed in the name of Islam is very remote, certainly with the election of Corbyn and his flat earth supporters.
Not everything that the USA is wrong. Not everything that the Tories wish to do is wrong. Sometimes to stand and fight is justified, and certainly when the evil that has grown out of the chaos of Iraq is on the up, right minded people have to make a stand and fightback.
Forgiveness can come after the evil has been eradicated and the world is made a safer place.

Posted by Independentwargamesgroup at Sunday, November 15, 2015