Well this months Wargames Soldiers and Strategy confirmed for me why it is my favourite wargames magazine. Apart from the theme being about the Italian Condottieri they also published the results of their yearly Great Wargames Survey.
I have found that WSS consistently provides some item that gets my old grey cells moving, and moves away from the spoon fed fluff that seems to inhabit our wargaming press in the main.
Normally one can be a tad cynical about poll's and surveys, as witnessed in our last General Election series of polls.
However the mere fact that over 8000 wargamers took the time to reply to the survey must provide a fair degree of authenticity to the findings.
I found of great interest, the results of the most popular periods of the respondents.
Science Fiction piled in to first place! with World War Two in second, and Fantasy in thrd.
My areas of interest, were down to seventh [ Napoleonic], Eighteenth century warfare weighed in at twelfth and Pike and Shotte at thirteenth.
The ancient period, once the colossus of the wargaming community could only manage a paltry sixth. Phil Barker must be spitting feathers.
Pulp Gaming was up to fifth in the poll of polls, so Zombies are confirmed as very popular.
So what conclusions can one draw from the survey, as regards the choice of favourite periods. Well it is pretty clear that the newer wargamer, ie under 40 is more game orientated, and less war orientated.
It tends to confirm that younger wargamers are more history light and the old duffers [ ie me] is happier reading about history and then attempting to play a game representing what they have read.
This is not to decry [well not too much] the younger gamer, but it does confirm for me anyway, just how piss poor our education system is as regards the teaching of history, and the reading of factual accounts. And to confirm my prejudices this week, I witnessed an episode of Pointless, where a university graduate answered that James Callaghan, had been a president of the United States.
[ F.F.S]
I think it should also be a wake up call to historical wargamers of the need to make more effort to get younger wargamers interested in historical wargames. I certainly think that smaller historically based games like Saga, have an important role in capturing a few youngsters [ie under 40]
I noted that the Medieval  period had finished fourth in the poll. Clearly Saga and the like had had some effect on wargaming tastes. So perhaps it is time to introduce a Napoleonic equivalent.
Still its not all doom and gloom in the wargaming world. At least there is a good percentage of gamers under the age of 40 happy to play a game with toys. Some will see the light and move into historical wargaming.
I did find it very interesting, that the Ancient period had fallen so far from grace, considering how in the 1970's,everyone played ancients. But that is history for you.
For me.  I will continue to potter about in my niche periods of Napoleonic's, the Seven Years War and the Renaissance, staying in the shadows, where I can read the odd tome of military history and plan my next foray into this wonderful hobby we have.

Some clever person clearly saw the writing on the wall as regards the future of ancient wargaming, when they producded this. 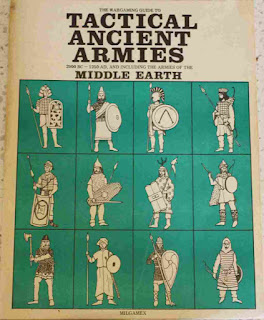 Posted by Independentwargamesgroup at Thursday, November 12, 2015