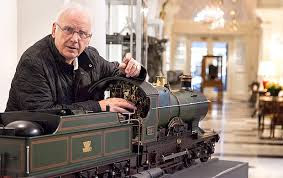 Last night, I had some downtime [ well actually every night I have some downtime] and watched a programme from BBC 4 about the History of Model Railways. I am of an age that makes model railways interesting.
Anyway as a programme it was well done, and didnt seek to take the piss out of the enthusiasts being interviewed, in fact it was very kind to them. I suppose having Pete Waterman show off his wonderful setup demands some sort of respect, and he is a very skilled modeler in his own right.He also owns my local railway that runs steam engines, so he is a good egg in my eyes. I was disappointed that Rod Stewart wasnt interviewed, but you cant have everything.
But I digress, as usual. Whilst watching the programme, I tried to imagine whether BBC4 could create a similar piece for wargamers?
I feel we have owned the right to have such a programme, and we also have the gravitas courtesy of the origins of wargaming to demand such a project, ie  H.G Wells, Robert Louis Stevenson, the Prussian War College, Britain's, Tradition, et.al.
Except when I really started thinking about it I'm not certain we as wargamers could actually pull it off without looking strange and well, a bit weird.
The last serious attempt to make wargaming mainstream was Battleground in the 1970's, which although very pretty to look at, was definitely a niche programme.
There was of course Game of War, which was butchered by most wargamers, but I liked on so many levels.
But now, I don't think it could be done without some wargamer letting his 'normal' mask slip and either saying or doing something that could cause offence or just sound plain daft. I include myself in this by the way. Actually it is a given that I would open my mouth and say something that would cause offence.
Although we have wonderful model makers, on a par with the train crowd, better painters than them, and probably more interesting subjects to show off, I somehow think that we as wargamers would shoot ourselves in the foot. Plus I can't imagine the producers of the programme would miss out on the opportunity to take the 'Michael' out of the wargaming genre.

Imagine as part of the programme, a clip from the infamous SS Liebenstandarte re enactors, or some people I once saw in Sheffield who had pointy ears, and fake Hobbit feet, explain that one away. Then of course there is the wargamer who would inevitably sidle up to the camera, and start pointing out that the toy soldiers are wearing the wrong headwear, and should actually have soft hats on their bonces, before attempting to show the interviewer the contents of their matchbox.
The number of times I have read a piece in the press where an earnest wargamer is being interviewed, which has ended up like an interview to the local asylum.
Perhaps our 15 minutes of televisual fame has passed us by, and may be it is for the best.
Plus I understand that television cameras put pounds on you, so I best forget that idea or get the use of a body double. [ Now is Tom Hiddlestone free?].

Posted by Independentwargamesgroup at Friday, May 06, 2016