Now that Christmas is over.

Well Christmas is over and with it the spirit of goodwill towards others, well it is in my little world. I wasnt going to comment or post about the latest edition of Time Commanders but I cant help myself, so sorry to anyone who enjoyed the programme, of which I understand there are a few.
I know absolutely nothing about television programming, but I would assume the idea is to provide a programme that will potentially entertain,educate, make the viewer think, or other some such reaction.
But my reaction was to sit open mouthed for about twenty minutes before my wife prised open my fingers and took the television controls off me in order to change channels.I think she feared for my health, or sanity.
Now when it came to creating Time Commanders what exactly was their hope, because it didn't inform or educate, it wasn't exciting and frankly it was a muddled waste of money.
[ Some of which was mine courtesy of the licence fund]
The choice of battles seemed reasonable, although Zama was a tad one sided for anyone leading the Carthaginians. Waterloo was a given I suppose and with the company that brought us Total War it was inevitable that Atilla would be included somewhere in the series.
I never thought I would say it but Greg Wallace was the best thing on the show simply for his manic enthusiasm in the face of complete and utter confusion. He actually looked professional, which isn't bad for an ex green grocer.
As for Lynette Nusbacher?, well what can one say without being investigated for saying what the majority of viewers would have been thinking. I bet there was some interesting conversations in some households where the children were actually watching the programme.
I suppose Ze [ an accepted form of saying he/she, without categorising the gender of the person. I kid you not.] should be applauded for sheer balls. 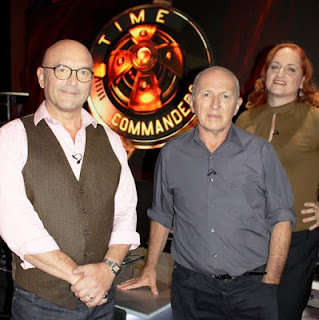 Should the programmer seriously consider producing a fourth series, can I suggest they use some competitors with at least a modicum of knowledge about the battle on offer. Frankly letting 'ordinary' people loose on a piece of military history just doesnt work on so many levels. It would have been more entertaining to ply the people with alcohol or some hallucinogenic drugs, prior to letting them  fight the battles, it couldn't have been any worse.
So with that little rant, can I wish everyone a very very Happy New Year.

Posted by Independentwargamesgroup at Thursday, December 29, 2016