I have been remiss in not posting as often as I should but sometimes I struggle to think of something that may be of interest for any wargamers who pop in. To be honest since the hiatus of finishing my ACW project I seem to have painted my self out.
John and I have managed three games however and all have been brilliant affairs. Very tense and hard fought as only wargamers who have known each other for a long time can be.
Two of the games were a rare affair for us. Matching Normans against Vikings.
Only John would have kept a set of rules printed in Miniature Wargames and painted two armies up to use the rules.
The actual rules were in issue 370, February 2014 and were written by a Stuart Smith. They were titled Invader 1066, Rules for the Norman Conquest and Beyond.Funnily enough the same magazine contains the last article I submitted to the MW, serendipitous.
Anyway I found the rules very easy to follow and was very impressed by how well they worked. What I particularly liked was the use of some event cards to throw some friction into the mix. Mr Smith did a cracking job of creating a set of rules that seemed to capture the flavour of the period. Shield walls, berserkers, mailed knights and housecarls.
We managed to fight two games in one session, swapping sides to try the armies out. The battles were one of those days where I could do no wrong. Need a six,check. Need a double one, check. Wipe out the guard housecarls, easy.
The games were coincidentally  the first time that I was able to use my 'new' dice commissioned by Stuart Mulligan for the renaissance period. So although the dice were an anachronism I was determined to try them out.... And as I said I could do no wrong. 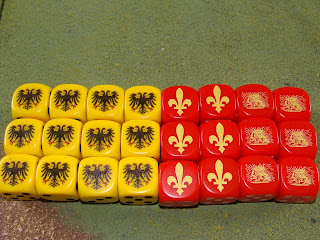 Last week we managed to fight a big malburian game using Black powder with their Last Argument of Kings supplement.It was back to normal for me I'm afraid. Blunders seemed to appear at the least appropriate moment, my British cavalry had no stomach for the fight and were scattered by Bavarian cuirassiers? I foolishly thought I could march through the French centre whilst ignoring a large brigade of dragoons sweeping around my rear. It was still a great game and the British nearly succeeded.
Three great wargames, no arguments, some gentle sledging and lovely colourful figures to move about a great set up. Whats not to like.


Posted by Independentwargamesgroup at Wednesday, February 28, 2018