A few posts ago I touched on the actual physical morale of the wargamer after I had lost badly in one of our games. Basically I attributed the defeat to my 'personal' state of mind.
'Morale' has been a feature of wargaming rules for many years now, probably since the early 1980's when the original morale charts started to appear.
I have no problem with morale in wargames rules and I am very happy [ish] to use whatever mechanism portrays the units state of mind.
However as light reading at bedtime I am re-reading the excellent, Knights Battles for Wargamers introduced by the late great Brigadier Peter Young.
The actual series of books was a lovely series of battles from history that could be utilised by wargamers.I am lucky enough to have the series and I tend to return to the excellent First Bull Run book for inspiration. But I digress.

The Brigadier playing mind games with the Don. 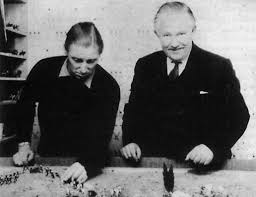 Anyway in the actual introduction Peter Young wrote the following;....

' Readers of this series will find that almost every wargamer has his own set of rules. I do not think this matters very much so long as the range of weapons and the distance covered in a move is realistically worked out. I only have one bee in my bonnet, which is that elaborate Morale rules are a waste of time.

Morale is in the mind of the wargamer himself, for ultimately a war game is a duel between two opposing generals themselves. Do not let them hide their deficiencies behind the alleged failings of their metal or plastic followers.'

It got me thinking about what modern wargames rules would be like should one actually remove the morale section of the said rules and instead plough on until ones opponent has realised they are beaten and concede. It might work and certainly John and I are able to recognise when one is beaten and would begin a rearguard action and get off the battlefield.
But would a lot of younger gamers accept the reality of a situation?
The Brigadier knew firsthand about morale and a general's state of mind so understood thoroughly when to press on or when to retire to fight another day. He also based his wargames rules firmly in the fun but historically correct camp so there would have been none of the to the last man scenarios.
But nowadays?
A lot of younger gamers have progressed via Warhammer and the like where to the last man is common because they can still win whatever scenario they are fighting. So heavy losses aren't relevant.
And my point?
I think morale lists etc were introduced because a lot of wargamers didnt know when they are beaten and were happy to plough on and refuse to accept that a situation was hopeless. A morale result forced the wargamer to accept that their army was struggling and near collapse.It also allowed a wargame to be completed within a set amount of time and not allowed to drag on ad-infinitum.

It is of course entirely subjective as everyone is different.

I have faced wargamers who were beaten before they had thrown a dice, such was their outlook on life in general. [A bit like Eeyore in Winnie the Pooh]
But I have also faced wargamers who were so pigheaded that they would battle and argue to their last casting simply because it wasnt in their nature to accept defeat.
So maybe we dont need artificial morale and perhaps the Brigadier was right.
But then he usually was............


Posted by Independentwargamesgroup at Sunday, December 09, 2018