I was a bit late in getting my copy of Wargames Soldiers and Strategy, [issue 104]  this month. Unfortunately this is not a review of the magazine but actually an observation regarding a small article? written by a chap called Chris King titled, INCLUSION.
Nowadays such a word is sadly a weaponised one [God I hate that word]

Mr King is one of those worthies that unfortunately seems to inhabit every part of modern life. Clearly by his own admission he feels guilty that he is in a privileged position being White, European [ I assume he meant British] Heterosexual and sadly for him and the vast majority of wargamers? we have had it easy?
He then takes the position that his article shouldn't have needed to be written [so one could ask why he did write it anyway] and certainly not in 2019, because lets face it we are all so WOKE [another hateful word] and on message.

Chris has taken umbrage with the way women are depicted in wargaming and the responses that his viewpoint elicits when he comments on their depiction. He then states that should he take his young daughters to a wargames show they will be confronted by images of women that he describes at best as denigrating but normally much worse ie. utterly unpleasantly represented. ie. unrealistic body shapes?sexualised, infantilised and sexualised?? bimboesque etc etc. You get the picture.
Being a positive, woke chap he then tells the reader things are improving and companies like Bad Squiddo headed by 'Annie' is producing more sensibly represented women.

An example of a more sensibly represented woman from Bad Squiddo? Another druidess, war dog handler [ who said I dont include women in my wargames?] By the way I love the figure and was very impressed by the range from Bad Suiddo. Note to Chris King, Annie was very proud of her range of sculpted female figures. 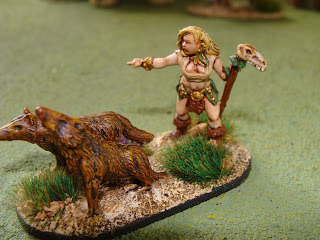 Unfortunately he spoils that improving vision by stating that the beer loving privileged wargamer is upset by his [always a man ] inability to display, buy or own his over developed women and show them on his wargames table.Its political correctness gone mad!

Three well blessed females. The moral depravity is shocking!
[Bought from under the counter at Colonel Bill's, a well known purveyor of such filth.] 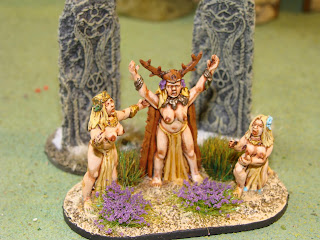 His argument continues [as they always do] to state that wargamers are effectively excluding women who are disgusted by these dreadful depictions of the sisterhood AND we are also tainting the opportunities for boys and young men to join the hobby because of the failure to depict 'women for men?' by not providing positive female images in a totally wholesome manner so that young men can realise that not all women are 'up for it.'

Of course the article has to include 'race' [where would we be without that thorny subject?] For some reason he cites the example of a wargamer modelling a vignette of a slave market in North Africa' and questioning the morality of the vignette.

To prove his credentials he then throws in the inevitable slogan; 'Keep it civil. Include not exclude!'
Warning the reader of the evil that clearly pervades the wargaming hobby he declares that he has only scratched the surface of the scandal of inclusivity and wargaming.
He then goes on, and on before once more offering us hope by stating; And times [at last] are changing.

And my point?
Well firstly I struggle to understand who this article is actually written for?

Being a historical wargamer, women very rarely get a look in simply because war was very largely a male domain and women were luckily under represented and very lucky they must have felt at times.  Im not one of those people who believes we should socially engineer history so that it becomes basically a huge lie, ie, a black Privy Councillor that was depicted in a new film earlier this year. How can we learn if we don't understand what went before?

In my 50 years [ is it that long?] of wargaming the scenarios depicted by Mr King just haven't occurred and if the had I'm very certain one of the thousands of wargamers would have definitely commented upon the event.
Most wargamers have children or more probably nowadays grandchildren. They are responsible adults. The depiction of a wargamer as painted by Mr King is not anyone I know, in fact I would argue very strongly that what Mr King is depicting is virtually non existent in wargaming.
And this is the rub because what this article seems to be describing is in fact something that is now identified as wargaming but for me is more accurately fantasy and sci fi gaming where ridiculously modelled warriors, dragging ridiculously modelled weapons that no one could ever lift, never mind use inhabit. The women inevitably are a pre pubescent boys wet dream and are frequently seen on the Internet and in computer games.

As for the accusation that wargamers need to provide a more positive image where we depict              ' women for men' is so naive and sadly deluded simply because young boys and men are bombarded with real life pornography every day of their lives. So believing a dubious female model will somehow corrupt their pure minds is laughable.
As for the idea that wargamers somehow exclude women from their hobby. I don't think that's just a female gender issue and certainly is relevant for any would be potential wargamer.

And the point of my post?
I refuse to be lectured to, we suffer this type of pontificating every day of our lives nowadays.
I certainly don't identify with the wargamer that Mr King describes, white yes.
But privileged?? I wish.
I love toy soldiers. That admission alone should tell Mr King that any issues I clearly have aren't concerning the exclusion of  women because lets be right why would a woman want to associate with such a person? Its a miracle that war gamers actually have a female partner at all.

As for my latest SPQR project, this is the first time I have owned and painted a couple of naked women so don't feel the need to apologise for their inclusion in my collection.
I don't believe its political correctness gone mad because like most wargamers I have a pretty decent understanding of taste and morals.
I dont need anyone telling me that wargaming has an issue. It probably has quite a few, but 'Inclusion' isnt one of them.
Here endeth the lesson........

Posted by Independentwargamesgroup at Sunday, September 15, 2019