Over the last forty or so years I have been lucky enough to war game consistently with one person who has been the perfect foil to my sometimes over wrought outbursts. We have been likened to 'the Odd Couple' but amongst his varied abilities John [ Reidy ] has always been able to make sense of new wargames rules, and to be frank is a bit of an anorak when it comes to poring over the minutiae of each new set.
At my insistence he wrote various rules that we regularly used for the Napoleonic Period, ACW, Malburian and of course, A Nostalgic Whim, rules that were put together when I returned to Old Scool Wargaming. He did the thinking, I just got them printed.
To be very honest, I know that if we are wargaming John will be able to explain any anomaly that may occur in the game, and if that doesnt work, we will throw a dice and move on. It is his fault that I am lazy when it comes to learning the rules.
Anyway on Thursday John managed to surprise me yet again when we fought a large Malburian wargame at his house. Using Blackpowder as the basis for the game he had cleverly crafted the order/ movement procedure from the new  The Kingdom is Ours,  ECW wargames rules into the game. 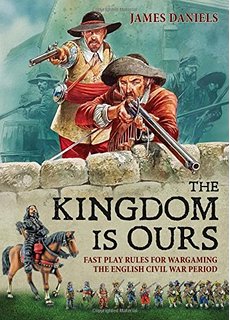 I knew John had bought the rules, and I knew he had been impressed by the movement system in them, but had disliked everything else about them. [ personal choice] Anyway Black Powder has a lot of detractors, and one of the biggest gripes is their simplistic and generic movement system, which lacks any real friction. That's before one uses the controversial ' Follow Me' rule. I like Blackpowder, it is simple to use and gives you a fun wargame, it does lack friction and of course detail of the period being fought.
Anyway I digress. With John using the mechanisms from KiO, the movement of units became very interesting and forced you to think carefully about what you wanted to do with a specific unit.
Lets just say the game we fought was brilliant, and ran very smoothly, I didnt win, but sometimes losing is okay, and to be honest I beat myself in some respects. But the game itself was very enjoyable and vastly superior to either basic sets of rules. He felt, and I believe him, it works best with the Malburian period, and using the two systems for later periods would cause too many problems.
I did try to convince John to put together a 'new' set of rules, so I could get them published, but he reckoned that we would be had up for copyright, but isn't that what most wargames rule books are about anyway?

Posted by Independentwargamesgroup at Sunday, November 06, 2016