Modern Life for me is a constant confused fug. I read and watch as things occur around me and wonder if its time to throw myself off a cliff like some daft lemming. [which apparently is a fallacy]
So its probably none of my business, [no actually it is ] but I have a small rant that I would like to get off my chest.
Leon of Pendraken fame is a top young man, keen, clearly enthusiastic and probably the type of boy you would like your daughter to bring home. He took over the Battleground Wargames Show and accepted responsibility for running it. Without people like him, most hobbies couldn't function.
One idea he brought in was that all women and children under 14 would get into the Battleground show for free.
A simple idea, and one that seems perfectly logical and very reasonable. But oh no, apparently in the United Kingdom the basic English words, 'Women and children under 14 get in for free' became controversial??? Was it the wording Free Women?
As a consequence this year in an effort to stop any controversy???  this was changed to Families get free entry. [ No I dont get it either]
This is the question I would like to ask, what moronic no life would think the offer was worthy of any type of comment that would force a change of wording to encourage wives, girlfriends, young children to spend a couple of hours with their 'life partner' and then inform the organiser of their concerns, and upset feelings.
I could understand any sort of upset if Leon had said ALL WOMEN should pay TWICE what men have to pay or even more controversially, NO ENTRY for WOMEN to go to a wargames show. Maybe that's where he went wrong, because any publicity is good publicity. 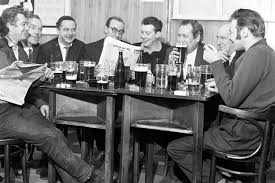 In a former life I was a member of my local Workingmens club, and women couldn't drink in the bar,  the clue was in the name ' Working men'. God did that get the Femicists in an uproar, until they were let in. It must have been a huge disappointment when they saw a bunch of old men, and young drinkers [me] sat playing dominoes and living the life [not] The clubs closed, and that way of life has now gone, sadly for me.
Couple this minor irritation to Partizan's badges that have been issued the last two years, requesting that the wearer does not want to be photographed whilst at the show?????
Which I must admit got my sad imagination working.
Did some wargamer, tell his 'life partner', ' Oh I'm just off to my cookery class Hunny Bunch [sic] and will be back later, before surreptitiously dashing to Partizan to buy some toys, and then rushing back with  a small amount of flour on his clothes, and some Greggs pasties in a basket to perpetuate the lie.
Only to be found out when his mush is plastered all over the latest edition of Miniature Wargames, which his partner 'always' reads.
So to all complainers, whiners etc, please engage the brain before taking to the moral high ground.
Oh and if someone can provide me with a reasoned explanation of these two diktats then feel free to comment.

'I know its an all male bar, but Im a bit worried about the stripper.' 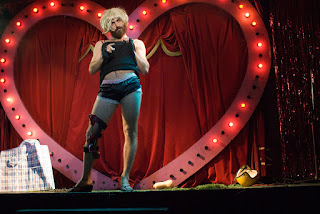 Posted by Independentwargamesgroup at Wednesday, November 30, 2016