There are a lot of detractors of the Black Powder rule systems, and I admit they can be like Marmite which I dont enjoy, however as I have stated previously their add ons are good and bring extra detail to the basic ruleset. Last week John and I had a large ACW set do using Black Powder's Glory Hallelujah rule set. I found the battle tense and fun at the same time, and a clear chance for a stunning victory was let down by my poor command throwing as I took the fight to the uppity Union.
I find that the rules bring a nice balance between playability and historical research.
So the battle against John ended as a close draw, with my rebels close to exhaustion.
This week I accepted a kind invite to fight at Paul Stevenson's who kindly hosted another ACW battle. This time we used Paul's 19th Century rules, which are still being tweaked [ although I like them as they are ]
For me Paul is the nearest person to an expert on the American Civil War, and although I know he would poo poo this title, he knows his subject very well. His 1990 from the Wargaming in History series is still one of the best wargaming books written for the ACW. 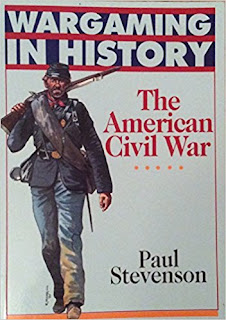 Again I took on the role of the rebels. [ I do like a challenge ] and decided to make things very difficult for my self by deliberately leaving a brigade off table. I then found I kept continually failing a dice roll to bring them on [ best laid plans and all that ]
The game again was very tense but also very enjoyable, I found the rules more detailed than BP
[ which is understandable ] but also easy to use. Lets be right if I can understand them, then everyone can. Paul has introduced some nice 'friction' ideas including a Training Test for when you want to get a unit to perform something a little more complex than marching straight ahead.
My rebels didnt 'do' training as I found to my cost.
So another great and enjoyable game and yet another losing draw. I feel like Middlesbrough, I just cant score.
Paul feels they still need a little work doing to them but I hope he gets to publish them soon, they are very good.

Posted by Independentwargamesgroup at Thursday, March 16, 2017