Following a conversation the other day with Dave Jarvis, painter extraordinaire he recommended that I check out a post that Barry Hilton had written about wargames shows. He had been impressed by the argument put forward by Barry.
Intrigued I visited the League of Ausberg blog and found the post, titled  'Outgrowing their Clothes'. The post was dated 21st March which explained why I had missed it. I was out of the country. But I digress.
Barry had two observations, one was the fact that several of the big shows, ie York and Tactica had basically reached saturation point regarding capacity of both punters and traders.I had already given my views regarding this year's show at York.

The second observation was the one that interested me in particular. This concerned smaller club shows that in the past had relied on certain traders who were guaranteed to draw in punters simply because they were attending and how some of these traders intended to become more selective in which shows they attended, thus causing these club events to probably falter and fail completely.
Now I love attending wargames shows. Years ago I couldn't sleep the night before I was attending such events. Obviously as one grows older the excitement like Christmas dims somewhat, but I still like to attend any show I can.

Nowadays I attend to see the games, and bump into wargamers that I only see at these events. Buying is a secondary issue, although I always end up buying something even if I don't need the damned stuff. Wargamers love retail therapy.
So Barry's observation doesnt affect me as regards the paucity of traders that are popular.
I think like a lot of things I am in the minority. Most wargamers attend shows to buy from their favourite company. Which probably explains how most shows empty out by early afternoon. So losing certain well known and popular traders will probably cause these club shows to have considerably fewer punters through their doors, and invariably lead to some of them closing all together....
A good thing?
Barry thought it was and normally he is on the money with his wargaming views.
Me, well yes and no. Like wargames magazines I view shows as the lifeblood of the hobby. Yes I know the internet has probably made magazines redundant, and of course one can buy from anywhere in the world and have the figures land on your doorstep within days or sometimes weeks.
Over the next couple of weeks I will see what effect some of the bigger names withdrawing from small club shows has on the footfall as I attend the Durham and Penrith shows. One is a long established club event whilst Penrith has been going for only a couple of years. So certainly with the Durham event I should be able to gauge the effect quite easily.

With globalisation, one can drink that goop from Starbucks anywhere in the world, and I view the bigger wargaming traders as similar.
I would still buy from them, but invariably at the shows you will see several traders all selling the same products to the detriment of the smaller businesses. I understand why this happens, but to survive club shows are going to have to work harder if footfall drops.
Personally I think it would pay for club organisers to seek out the new small wargaming traders and figure producers in an effort to encourage them to attend such events, and make it worth their while, ie cheap stalls..
So quality games will be required. A return to trophies for the best games perhaps. No club night games. A greater variety of traders with little or no overlap between what they sell. [Probably difficult, I know] A return of well run bring and buys, or tabletop sales. So effectively a return to basics but with a 21st century twist. Better advertising via the internet.
Smaller but smarter. There's a bit of 21st century gobbledygook bollocks for you.

One from the IWG archives.... 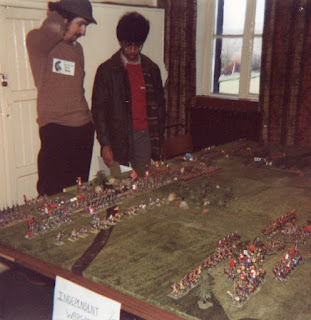 How it all started. The Independent Wargames Group hosting a renaissance game circa the early 1980's at the Durham Wargames Show.  Here John has cornered a young Rahul Sarnak and refuses to let him leave until he has explained how the WRG rules work and would he like to try the deerstalker that he is wearing in a jaunty fashion........

Posted by Independentwargamesgroup at Monday, June 04, 2018