The battle for Langwitz marsh 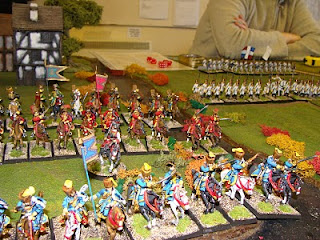 The next Austrian move was slightly better as I could at least bring on the Hussars,and move to engage the Prussian light cavalry in an attempt to buy the Austrian infantry time to deploy.
The infantry were able to shake out into line in front of Mollwitz,and deploy our only gun battery.
The hussars charged the Prussian Black hussars,but lacked support from the other light cavalry,which proved to be a problem throughout the light cavalry encounter.
My hussars were turned back,but managed to at least not rout. In the centre,on the Prussian move,the garde brigade marched up to close range of the Austrian centre. The effect should have been deadly,unfortunately for the Prussians they were not able to disorder the centre units through fire,and Pauls saving throws continued.
More importantly the suporting Prussian brigade refused to move. Best of all the third Prussian brigade came onto the field of battle directly behind the centre brigades,thus leaving their right flank only covered by the gun batteries. Their cavalry brigade,continued to stand about supporting the efforts of the black hussars.
Posted by Independentwargamesgroup at Sunday, January 31, 2010