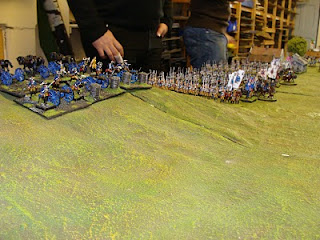 Move two caused more anguish,as I attempted to off set the Prussian cavalry be deploying the Austrian hussar command [me] near Langwitz village.These failed their command throw!
As did the entire Austrian infantry command, all I could do was stand and watch as the Prussians took their turn. In Black powder it is feasable for units to move a total of three times in a turn. All the Prussian cavalry commander had to do was hold his nerve and he could sweep the Austrian march columns away. Luckily not only did they not declare they were charging,but they also failed their command throw.
The Prussian infantry however were able to plough on and deploy into line,in musket range of the Austrians. We had given the majority of the Prussian infantry 'first fire' capability,which allows an additional dice to be thrown once in a game by the unit firing. This is most effective at close range, luckily one of the Prussian brigadiers nerve failed and they fired at long range. By judicious saving throws [well done Paul] the effect was minimal [ie no hits] and the Prussian brigade had wasted their first fire. The large Prussian battery wasnt much better,and tended to overshoot.
Posted by Independentwargamesgroup at Sunday, January 31, 2010