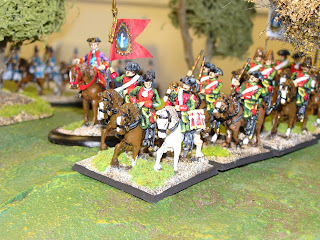 1.
Well today Marie Theresa got her revenge on the Prussians.
I will try not to be too gloating of a comprehensive victory for the forces of Austria, but it will be hard......
When I initially decided to use Mollwitz as a battle to try out the Blackpowder rules I was a tad concerned about the superiority of the Prussian forces.
In order to give a historic feel to the game,the Prussian infantry had to be much better than the Austrians.I really thought that this would prove decisive,as the Prussians should have been able to out manouvre and out shoot their opponents.
This was balanced by the better and more numerous Austrian cavalry.
Anyway onto the account. The game was staged at the Durham Wargames club,which has a first rate set up as regards tables,toilets and kitchen facilities. Not withstanding their lack of clocks [hello Dave] the club are really lucky to have such a resource.
The battle was fought on a 14' by 6' table,and had four players a side. I attempted to give each player at least four units to command,without the artillery. All units started off table and had to march on. Again I was concerned that the Prussians would steamroller the Austrians unless I slowed down their deployment. The Austrians were deemed to move first. True to form, the Austrian infantry failed their initial commad throws,so could only march on table due to them being in march column. The Prussians had no problem,and more worringly the Prussian cavalry deployed straight onto the battlefield on the left flank facing Langwitz village.
I had to admit that Colin [ Ashston] totally wrongfooted me here,as I didnt think he would deploy his cavalry so aggressively, well done Colin.
Posted by Independentwargamesgroup at Sunday, January 31, 2010